The quiet devotion of Spain’s Sufis 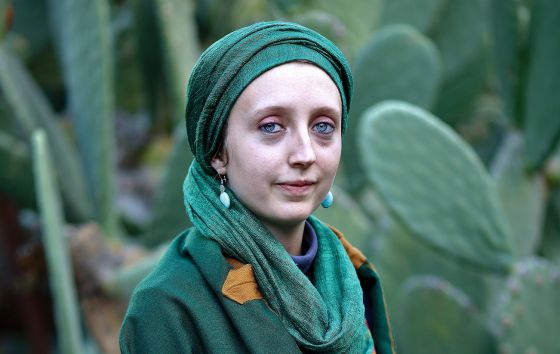 Mariam Sakina Scott, 22, was one of the first to be born into a Sufi convert family in Órgiva.

Known as the gateway to the Alpujarra mountains in Andalusía’s Granada province, Órgiva is also one of Spain’s most culturally diverse places, a bustling market town of around 6,000 people and according to the local council, home to 68 different nationalities.

And Baraka, a restaurant and tearoom with tables and chairs outside on a quiet street in the town center, is a pleasant reminder of Órgiva’s relaxed multiculturalism. It’s run by 41-year-old Pedro Barrio, a former wine taster and restaurant owner from Bilbao who changed his name to Qasim when he converted to Islam more than a decade ago.

Like around 35 other families in Órgiva’s Spanish Islamic community, Qasim adheres to Sufism, described by 14th-century Arab historian Ibn Khaldun as “dedication to worship, total dedication to Allah most High, disregard for the finery and ornament of the world, abstinence from the pleasure, wealth, and prestige sought by most men, and retiring from others to worship alone.”

We converts are seen as strange. Islam isn’t what people think it is. Islam is peace

Qasim says his faith gives him “hope and security,” but admits it has also caused him problems, particularly with his family and friends, who have come to associate Islam with jihadists and Salafists, and a radical interpretation of the Koran. Spain’s Sufi community has also been monitored by the National Intelligence Center.

Mansur, formerly José Carlos Sánchez, explains that Sufis live in the world without necessarily being of this world. “Every day I ask Allah to help me convert my ego into my prayer mat,” says the 41-year-old university graduate. “There is an undoubted rejection of Muslims in our society.”

His wife, Bahía (María José Villa), aged 35, agrees: “We converts are seen as strange. Islam isn’t what people think it is. Islam is peace. Islam is asking God for love, so that you can share that love with others. Unless your intention in life is to become pure love, then your Islam makes no sense.”

Muhammad Iskander, a former merchant seaman in his mid-fifties, says it is precisely the pacifist element of Sufism that Islamist radicals find so hard to accept: “They do not tolerate us, and are trying to abrogate the Koran’s message of mercy for that of the sword.” 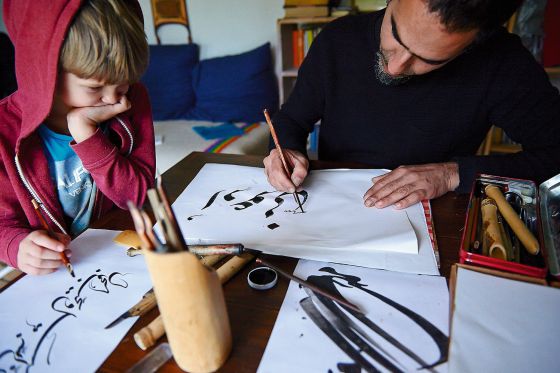 Ali writes calligraphy under the watchful eye of his son. / FERNANDO SÁNCHEZ ALONSO

Most Spanish Sufis belong to the Naqshbandi order, which traces its spiritual lineage back to Abu Bakr as-Siddiq, the first Caliph and a companion of the prophet Muhammad. The order’s emir in Spain is Umar (formerly Felipe Margarit), who was appointed in the mid-1970s by Shaykh Nazim al-Haqqani, the leader of the Naqshbandi order who died in May of last year at the age of 92.

Umar describes the Naqshbandi order as “a cross between a spiritual center and a hospital. “Nazim welcomed all those who had been wounded by our society. He described himself as a zero, saying his life was only meaningful if God, the One, was at his side. His son, who has succeeded him, believes the same.”

There are around 1,200 Naqshbandi Sufis in Spain, and the largest community is to be found in Órgiva. The reason for this is a happy accident: it’s where Umar was living before he converted to Islam. And once he had been proclaimed emir by Shaykh Nazim, those Spanish Sufi Muslims who could, moved to the town. The second-largest Sufi community in Spain is in Villanueva de la Vera, in the western province of Cáceres.

Amid weak winter sunshine, a group of Sufi farmers gathers olives in the mountains that surround Órgiva. They and their families live a simple life, but are not isolated from the world, like other religious groups such as the Amish are. They are connected to the internet, watch television, and read newspapers, and their children attend local schools. 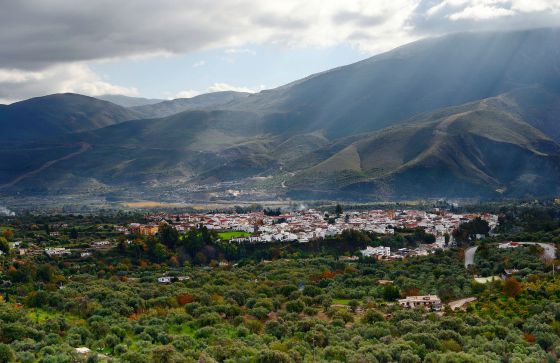 Órgiva, in Granada’s Alpujarras, is home to people of 68 nationalities. / FERNANDO SÁNCHEZ ALONSO

On Thursdays at nightfall, the community meets in the dargah, a temple hidden away in the olive and orange groves around three kilometers outside Órgiva to celebrate the dhikr, or the recitation of the names of Allah, along with the hadra, a meditational process that consists of intoning a series of chants in praise of God, accompanied by rhythmic swaying and percussion.

“This reminds us of the moment when God filled Adam with breath,” says Amin (Andrés Fernández). “On Fridays, the holy day of Islam, we also celebrate Jummah prayers, and then the community sits to eat together. All our prayers are recited in Arabic, although that is all we know of the language. Our Islamic education has come from many sources, from conversations with other, wiser, brothers, and from the Shaykh’s sermons. The Naqshbandi are probably the least intellectual of the Sufis: we are more interested in the heart.”

Around 500 kilometers away, in Cáceres, is the tiny community of Aldea Tudal, a district of Villanueva de la Vera, which is home to Spain’s second-largest Naqshbandi Sufi community, led by Abdul Wahid (Cristóbal Martín). In the outskirts of the village, we’re met by Omar Ibrahim, originally from Madrid, but who lived in Germany for 35 years, where he ran a chain of restaurants: “Then I sold up and came to live here.”

The Salafists in Egypt and Libya, as well as the Taliban in Pakistan, have all persecuted Sufi communities

It’s Thursday, and Omar is waiting for his fellow Sufis to arrive at his house, which doubles as the community’s dargah, to celebrate dhikr. “I converted to Islam almost 30 years ago. That was when I first felt like a true Christian. There is no contradiction, because Jesus Christ is respected as a prophet in Islam. We believe in the saints: we venerate their tombs and their relics. This distinguishes us from other Muslims,” says Omar.

He goes on to explain why Spanish converts to Sufism have adopted new, Arabic names. “You choose your Arabic name. This new name expresses the essence of who you really are and the disciple aspires to reach its meaning. Omar, for example, means force or sustenance.”

As with the community living in Órgiva, the Sufis of Villanueva de la Vera are all Spanish. “In fact, there is only one Moroccan here,” says Yamaluddin (Juan Andrés Molina). The bearded 44-year-old from Madrid is wearing the traditional Naqshbandi ring as worn by Muhammad, along with a waistcoat and baggy pants, and a green turban that will eventually serve as his winding sheet when his naked body is buried.

Sufi women also wear ample, baggy clothing, along with a headscarf, as 41-year-old Hawa (Ana Rosa Soto) explains: “Women should dress modestly. But we also cover ourselves to protect two energy centers on our body: the head and the throat. Thanks to Islam, I have recovered my femininity,” she says. “And nobody has ever given me any problems for dressing like this.” 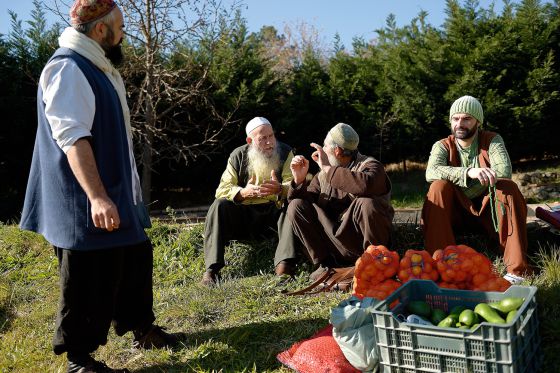 Mariam Sakina Scott, who was born a Muslim in Órgiva 22 years ago, to American and Spanish parents who had converted to Islam, says that wearing the headscarf has created problems for her, particularly at school. “Everybody knew I was a Muslim, but I don’t make a big deal about it. In our society, there is this idea that Islam is a fanatical religion. But people have absolutely no idea about Sufism. There are people who ask me if I belong to a sect. I tell them that Sufism is about respect and love between all God’s creatures.”

Shaykh Umar Magarit explains that Sufism “obliges us to ask at who we are in reality. And that question can only be answered by looking for Allah in our hearts. And to do that, Sufis comply with all the precepts of Islam, and then try to transcend them.”

The Salafists in Egypt and Libya, as well as the Taliban in Pakistan, have all persecuted Sufi communities, branding them heretics. But Sufism is an integral and ancient part of Islam, and some studies suggest it even predates Muhammad, and emerged in Khorasan in what is today Iran as a result of Christian, Hinduism, Buddhism and Greek philosophical thinking, along with shamanistic influences from Central Asia.

Sufis say that while their religion is embedded within Islam, its purpose is the same as all the great monotheistic faiths: union with God. The only way to achieve this is through unconditional love for everything and everybody. Ibn Arabi, the Sufi mystical poet who lived in Spain in the 12th century, wrote: “My heart can adapt to all forms. It is pasture for gazelles. And a monastery for Christian monks, and a temple for idols, and the Kaaba of the pilgrims, and the tables of the Torah, and the book of the Koran. Because I follow the religion of love.”